Although David Lynch insists we should “look at the donut, not the hole” when watching Twin Peaks: The Return, it’s not always easy to retain that focus when -like the deep-fried snack itself- it is the “hole” that makes Twin Peaks so distinctive. And it is these deliberate cavities in the show’s narrative that arguably provide most fans with their greatest pleasure: homebrewing crack-pot theories to share and compare with equally off-kilter mental convolutions from their peers.

From way back in 1990 when newly forged Peakies would discuss their theories around the oh-so-nineties forum of the Watercooler to the modern day where a deluge of theories about Twin Peaks: The Return regularly fill Sub-Reddits and ever-growing Facebook groups; the evolution of fan theories have matched the show beat-for-beat in both its widening scope and peculiarity.

To celebrate this integral part of the Twin Peaks experience, we here at Back To Twin Peaks have developed a tool to help you create your very own “Half Baked Cherry Pie” at the mere push of a button.

Start by choosing a character, select two different potential actions/consequences for them to create your own bespoke theory.

You can share your likeliest, weirdest, and just flat out insane theories on the site and your own social media. Vote for your own or other visitors’ prophecies to help the very best and craziest theories reach the top of the leaderboard. 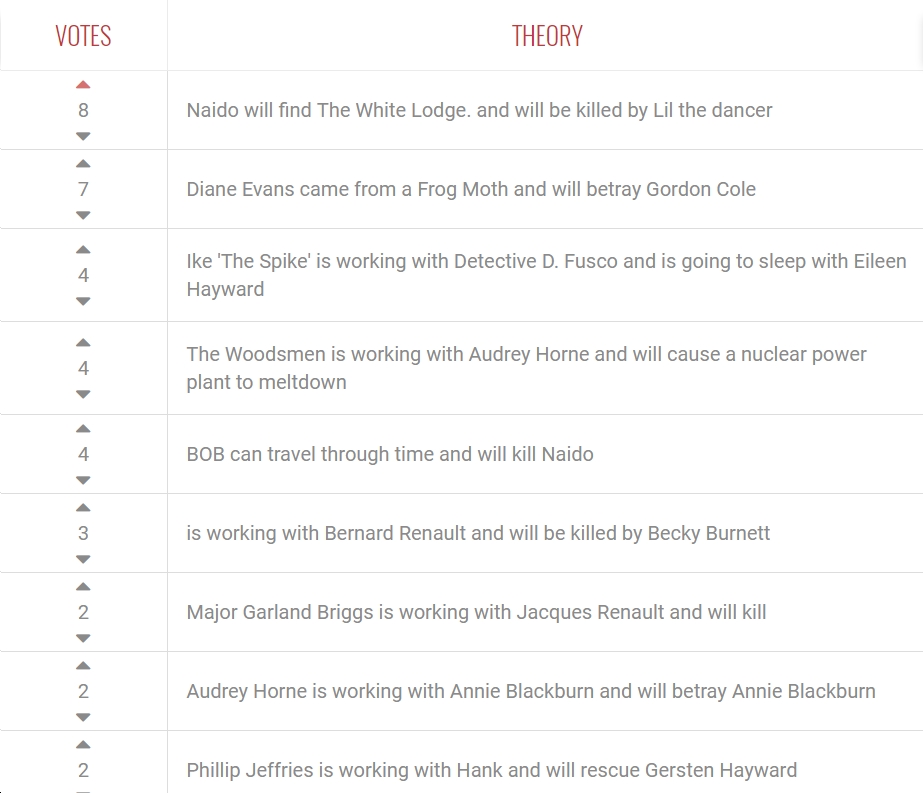 Will Your Theory Be the Right One?

Feel free to help yourself to as many slices of our Half Baked Cherry Pie as you like. Our combinations will be updated on a weekly basis so please check regularly to see if you can become Mr/Ms. Jackpots by correctly forecasting the most unpredictable show on television, Twin Peaks.