A Tour Around The Real Twin Peaks

Join Casey Stanton, a North Bend resident as he takes us on a guided tour around the real Twin Peaks, including: The Great Northern Hotel, The Roadhouse, an exclusive look inside Laura Palmer’s house and much more…

Twin Peaks is the ultimate prototype of your average small town. A semi-secluded community, far from the city and surrounded by woods and mountains. A dreamy place to live a quiet, carefree life.

And yet, something grimmer lies beneath the surface. Nothing is ever what it seems in Twin Peaks. First it comes in small, unnoticeable fragments and then, little by little, it permeates the whole town like an incurable disease: the foul, rotten stench of corruption.

Squeaky clean girls sell their bodies at an illegal brothel just across the border. Their mothers drink and smoke their troubles away, as their fathers nonchalantly cheat on their spouses or even beat them… Until, one morning, the prom queen’s corpse, wrapped in plastic, is washed up on the shore.

Everyone is responsible. Her death is the price the town has to pay for having looked away and pretended not to care for too long. Secrets begin to surface. Those once perfect households become unbearable prisons. As tragic as this description is, it eerily resonates with many people around the world. Twin Peaks is virtually everybody’s town and its residents are everybody’s neighbors.

We all know a Laura Palmer, a Shelly Briggs, a Sheriff Truman, a Lucy Moran and even a Log Lady. We are all part of the town and we all love those who live in it. We envy their perfection, until we realize that they are not perfect at all. And we cannot do anything but embrace their most hideous, darkest secrets, knowing that – somehow – we silently share the same burden. Welcome to Twin Peaks.

It was a friend of Mark Frost’s who suggested a possible shooting location to match the writers’ vision of Twin Peaks – North Bend, in King County, Washington. Generally, fans consider North Bend (along with the nearby town of Snoqualmie) as the real Twin Peaks. North Bend is a small community, surrounded by woods and foggy mountains. A place like many others… except the worldwide success of Twin Peaks has been attracting people for decades, making North Bend a popular fan destination. This once little known city still holds the annual Twin Peaks Festival and often organizes fan tours around some of the show’s most recognizable landmarks.

Meet Your Guide to the Real Twin Peaks: Casey Stanton

Perhaps you’ve never had the chance to visit North Bend. Maybe you’re a die-hard fan who lives far away, or maybe you simply never managed to arrange the trip. Don’t worry – we’re here to help! Our friend Casey Stanton is a resident of North Bend, so, who better than a local AND a Twin Peaks fan to show us around? Casey and his friend Ilaria Rivoire recently decided to take an extensive tour and grabbed a bunch of photos and videos. Casey kindly agreed to share it all with us – thanks, buddy! So, without further ado, the time has come to sit back and enjoy a damn fine walk around Twin Peaks. “Let’s rock!”.

“Reinig Road is considered the scenic route between North Bend and Snoqualmie,” Casey explains. “There is a tunnel of sycamore trees that were planted in the 1920s. The trees themselves are considered protected historical landmarks. The area is indeed covered by Douglas fir trees.”

Here you can see Casey’s photo of Laura’s log alongside a still from the series pilot. Casey tells us, “Laura’s Log is chained to the shoreline and has a plaque next to it commemorating the important scene from Twin Peaks.”

Kiana Lodge was featured as the interior of the Great Northern Hotel and is now used as a private event and wedding venue. Twin Peaks fans are welcome to look around as long as there is not a private event being held. As you can see from Casey’s photos, a lot has changed, but it’s still recognizable.

According to Casey, “The bridge is part of an old railroad that is now a section of the Snoqualmie Valley Regional Trail. It’s a popular area and people swim there all summer long. It used to be popular to jump from the bridge into the river, until the city passed an ordinance prohibiting that. It’s a popular place for fans of the show and you can always find some sort of graffiti referencing Twin Peaks.” 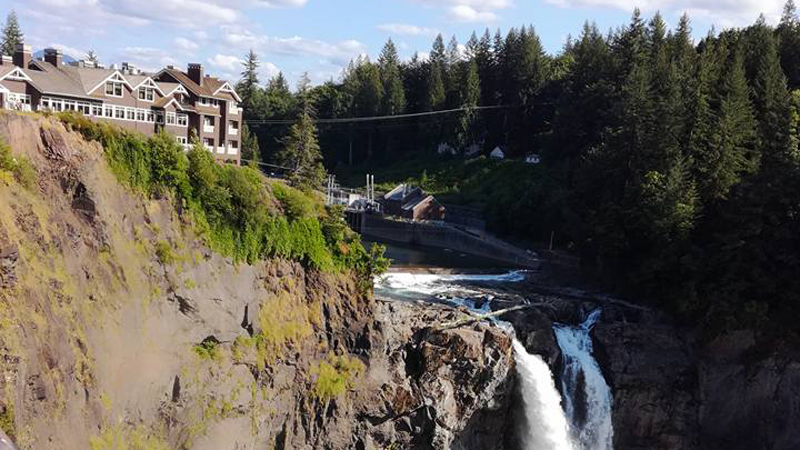 “The Salish Lodge area is a very popular tourist spot,” Casey claims. “It’s often crowded with people there to see the Snoqualmie Falls. In my opinion, the best time to come is in the evening. It’s a lot less crowded and they have lights that shine onto the falls at night.” Visitors are welcome in the Lodge itself (no pun intended), and the restaurants inside are good. Both gift shops in the area have a little bit of Twin Peaks merchandise on sale, and they hand out pamphlets with a map of all the Twin Peaks filming locations in the area.

It ceased operating as a gas station not long after the show aired. The building has housed different businesses over the years, such as a gardening supply store. It is currently vacant, with a for rent sign in the window. The house used for Ed and Nadine’s home is directly across the road from it.

As we approach the last stop of our tour (for today, at least), Casey says, “The Roadhouse is a wonderful restaurant in Fall City and the building itself has been there since 1916.” There is also an inn and several rooms available. While the interior was not used at all for the show, you can often see people eating there while wearing Twin Peaks shirts and it’s a popular spot for fans to meet. The building used as the exterior of the Bookhouse Boys house is right next to it. Plus, the building used for Hap’s Diner (where Chet Desmond meets Irene in Fire Walk With Me) is directly across the river from the Roadhouse.

The tour is not over yet…

Next week we’ll be visiting some of the most iconic season 3 locations… plus, an exclusive look inside the Palmers’ house. Don’t miss it! Meanwhile, feel free to leave a comment, share and like.