A great alternative option for your Twin Peaks outfit is a Maddy Ferguson Halloween costume. Maddy (or Madeleine) Ferguson was Laura’s cousin, who looked mysteriously like her… Except she had huge spectacles, brown hair and was less inclined to sleep around and do lots of drugs.

She appears apparently out of the blue after Laura Palmer dies, ostensibly to attend her funeral. But she is also there to help Laura’s parents, Leland and Sarah, deal with their grief at the death of their daughter. However she hangs around Twin Peaks until half way through the second series, when we see BOB, inhabiting Leland Palmer, killing her.

During her time in Twin Peaks, Maddy grows gradually more and more like her. Maddy straightens her hair, and removes her glasses. Laura’s old boyfriend James even admits that she reminds him of Laura. She also makes friends with Laura’s old best friend, Donna, and along with James they investigate Laura’s death.

There’s a really interesting scene where Donna and Maddy sing with James. Because of their chemistry, we see that it’s loaded with sexual tension between the three of them.

You need to remember to act demur, and keep pushing your glasses back up your nose. And perhaps act suspicious and investigative! 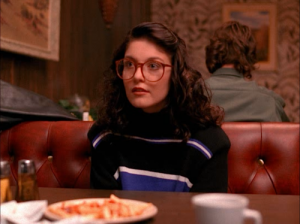 Let us know if you are planning on or have dressed up as Maddy. We want to see your costumes! You can post them at on our Facebook page, or share them with us via Twitter. The best one wins our respect – and that is truly priceless. Or, you can return to the main Twin Peaks Halloween costume page and choose another character.