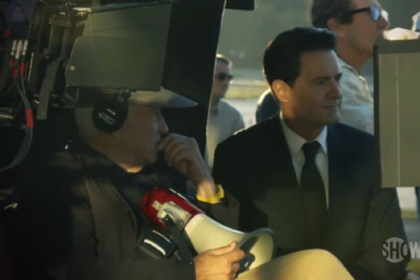 All has been rather quiet on the Twin Peaks 2017 front for a while now. Except for the publication of Mark Frost’s book, there’s been much mystery surrounding the forthcoming Twin Peak third season. 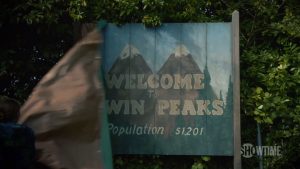 Until yesterday, that is. The official Twin Peaks Facebook page posted a short video showing a little insight into the actors’ thoughts about the returning show. And it’s not just the returning actors talking.

The clip starts off by showing actors who play law enforcement characters, Miguel Ferrer, Kyle Maclachlan and Harry Goez, talking about hearing rumors of the show restarting. We also see Kimmy Robertson, who played the unlucky in love Sheriff’s office receptionist Lucy, talk about how she experienced “the strangest feeling”.

We also get to see some teasing glimpses of the landscape of Twin Peaks. This includes the iconic town sign being unveiled and the dramatic waterfalls. We see some intriguing shots of other vistas as well.

The short video goes on to show a few shots of filming, as well as some of the new faces. We meet Jim Belushi, musician & actress Chrysta Bell and Dublin actress Amy Shiels. All the actors are gushing about their involvement in the Twin Peaks 2017. The video is sure to hype the already high level of excitement surrounding the mysterious show’s return. 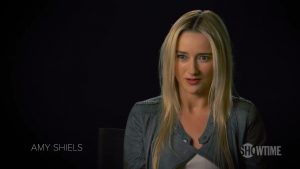 Watch the video below and enjoy seeing how your favourite characters look after 20 years. Especially how beautifully gray Bobby Briggs’ hair is. I like that he’s embraced it – it’s a strong look!

Who are you most looking forward to seeing in Twin Peaks 2017 – Agent Cooper? Or Laura Palmer? Or maybe one of the more obscure characters? Let us know in the comments.