So it feels like the pace is gathering in the run-up to series three of Showtime’s Twin Peaks. There’s been semi-regular teaser trailers on Showtime’s YouTube page, and on their Facebook page. One shows behind the scenes & the actors, and one was teaser clips of the landscape and Agent Cooper. One was even just a short video of director David Lynch eating a donut. But the new Twin Peaks teaser out today isn’t actually for the new series – it’s for Showtime’s reruns of seasons one and two of the hit 90s show.

In this trailer we see a montage of clips all centering around the theme of coffee. Entitled, naturally, ‘Damn Good Coffee’, it starts off with our favorite joe-swigging detective, Agent Cooper. He’s with Sheriff Truman at the station and, waving a mug, states, “If you say drink coffee, I’ll drink coffee”. 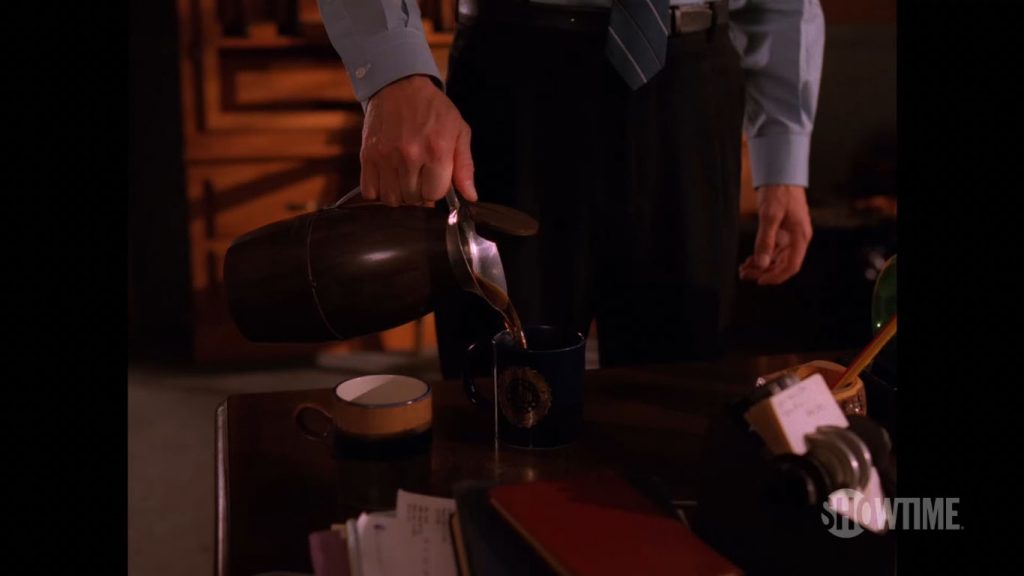 And there proceeds the remainder of the trailer – shots of the hot dark stuff being poured, and clips of lots of the characters asking for it. This includes the sadly deceased actors Jack Nance (Pete Martell), Miguel Ferrer (Agent Albert Rosenfield) and Catherine Coulson (Log Lady). We also see Sheriff Harry S. Truman, who is also not returning as he is retired. It is expected that the actor Robert Forster will play Sheriff Frank Truman, Harry’s brother, in an equivalent role.

The whole teaser plays out over the strains of some typically Twin Peaks-esque saxophone jazz licks. Perfect for combining with that jet black java.

SHO 2 is showing back-to-back episodes of the first two seasons of Twin Peaks on Sundays, at 7pm ET/PT. The new season three premiers with a two hour opener on Sunday May 21st, at 9pm ET/PT.

What do you think of the trailer? Does it have you salivating for your coffee and Coop? Let us know in the comments, or on Twitter or Facebook.