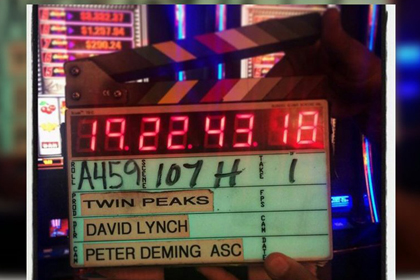 When is the Twin Peaks season 3 air date?

Initially slated for 2016 (25 years after the final episode of Twin Peaks season 2 aired), it appears the wranglings between Lynch/Frost & their channel, Showtime, delayed the show somewhat. Showtime have now confirmed the show will air in the second quarter of 2017. Current rumors suggest the Twin Peaks season 3 air date will now be summer 2107.

Back in April, the actress who plays Double R Diner waitress Shelley, Mädchen Amick, posted a photo of the wrap slate.

What channel will it be on?

Showtime in the US, and Sky Atlantic in the UK.

Is there a trailer I can watch?

How many episodes will there be?

Cast members Sheryl Lee, Sherilyn Fenn & Ray Wise have all stated that there will be 18 season in Twin Peaks season 3. However neither Showtime nor Lynch have confirmed as yet.

How am I going to while away the time before it starts?!

Well, you could rewatch all the old episodes on Blu-Ray to refresh your memory. Or you could pre-order Mark Frost’s book, ‘The Secret History of Twin Peaks’ which will be released on October 18th. You can pre-order it by clicking the image:

What will you be doing until Twin Peaks season 3 airs next year? Let us know either in the comments below, or on our Facebook page, or share them with us via Twitter.