Twin Peaks Season 3 is on the way. As well as great haircuts and killer fashion sense, we got some awesome and memorable sets and locations. This has reignited interest in one of TVs best, and weirdest shows and has prompted many of us to revisit the series. Well what else are we going to do until 2016?

There’s been no solid news on filming locations yet so all we can do is guess and hope we’ll see the familiar places of Snoqualmie and North Bend in Season 3. I can’t help but wonder what these places look like now – will we even recognise them in season 3? Well, thanks to Charles at www.intwinpeaks.com we have a pretty good idea…

Since 2001 Charles has travelled most of  Washington State and Southern California to photograph as many Twin Peaks locations as he could. We’ve put together some of our favourite ones. Check them out below and let us know what you think in the comments.

Firstly, a word from Charles:

“One of the most compelling things about seeing the locations in person is to discover how some of them have changed over the years. What’s the same? What did they alter for the shoot? What was it about this spot that seemed right for the show? But what really thrills me and keeps me going back for more are the rare, precious moments when I’m standing there at a location and I’m deeply hit by the Twin Peaks atmosphere –that undeniable moody allure of, say, the mist rolling over the mountains, a traffic light rocking in the breeze or the sounds and scents of Douglas Firs rustling in the wind”…

Glastonbury Grove: First seen at the end of Episode 27, Season 1 – the entrance to the Black Lodge.

What have the past 25 years had in store for Bookhouse Boy Big Ed? Did he end up with Norma? What happened with Nadine? And will we see Big Ed’s Gas Farm in Season 3?

The fateful place where it all began (well kind of…). Laura’s Log – where Pete first sees her wrapped in plastic – the unforgettable and iconic image we have all come to know so well (side note: makes a pretty darn good – and cheap – Twin Peaks Halloween costume). Not much changed here. Likelihood of us revisiting this in Season 3…? 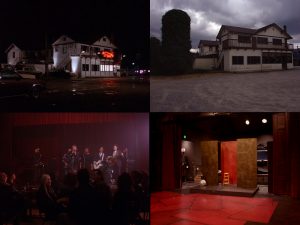 The roadhouse was the center of so many big scenes in the original series. Will we see it in Season 3? Judging by Charles’ pics it doesn’t look like it has seen much use in recent times. 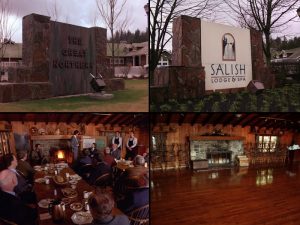 What about the Horne Brothers? Last we saw of Ben Horne, Doc Hayward had smashed his head into a fireplace. Does he recover? We’ll just have to wait and see. We may not have to wait till 2016 if Mark Frost addresses this in his forthcoming Twin Peaks book.

And what about Harry, Andy, Hawke and Lucy? Will we see them back in the Twin Peaks Sheriff’s Department in Season 3? Another frequent location in the original series. Nice to see not much has changed here.

Have you been to any of these Twin Peaks locations or different ones? Let us know in the comments below and share your pics with us on Facebook.

Thanks to Charles for these awesome photos. And the great news is Charles is already geared up for finding all the new locations for the Season 3 2016 return of Twin Peaks. Keep an eye on his website www.intwinpeaks.com for updates.

Oh, and for those of you who were worried about one of the biggest cliffhangers and unanswered questions of Season 1 & 2… You can stop holding your breath…

Yes, despite all the odds (a cage of tarantulas swinging above his head), somehow Leo managed to finally finish building his house.